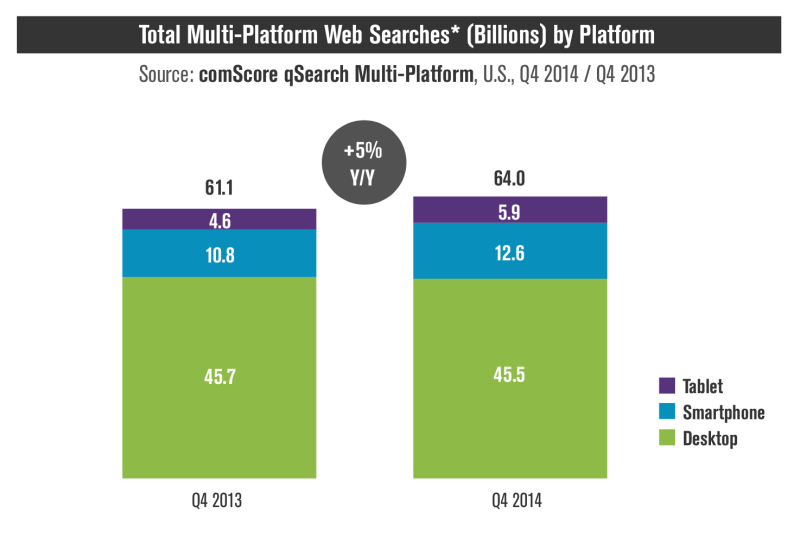 On May 5th, Google confirmed what many of us have been anticipating for quite some time: Mobile has finally surpassed desktop searches on Google.

You’ve probably heard about Google’s mobile update, which was supposed to give a ranking boost to sites that complied with Google’s mobile-friendly best practices. Many SEOs (myself included) were expecting huge impacts, since Google said this change would be bigger than the notorious Panda and Penguin updates. However, despite all the hype surrounding “mobilegeddon,” most of us haven’t noticed much movement in terms of rankings or traffic.

Although the mobile-friendly update wasn’t the shakeup that many of us expected, I think it’s a part of much larger shift towards a mobile-first web. That being said, if you still haven’t made your site mobile-friendly, I would highly recommend making it a top priority.

Back in March, comScore released their “Digital Future in Focus” report, which included some interesting stats on mobile usage. If you look at the graphic above, you’ll notice that mobile traffic gradually increased, while desktop traffic declined.

Google knows that mobile is the future of search – and in many ways, the future of their company. That’s why they’re aggressively taking steps to improve the mobile user experience.

Google also announced that they would be revamping their ad platform to benefit mobile users and advertisers. One of the most exciting features is the cross-device conversion tracking, which can track a constellation of sessions between desktop and mobile devices. The new feature will help advertisers track revenue attribution to see where customers are converting. Google is also making it easier for advertisers to track online visits to in-store purchases.

Another cool feature is how Google is tailoring industry-specific ad formats. For instance, if a user is searching for a car, they can click on the image to see more details about the vehicle, like horsepower and estimated MPG, and then they can click on a “Dealers” tab to find dealerships in their area.

If you want to see the full AdWords live stream, you can view it here.