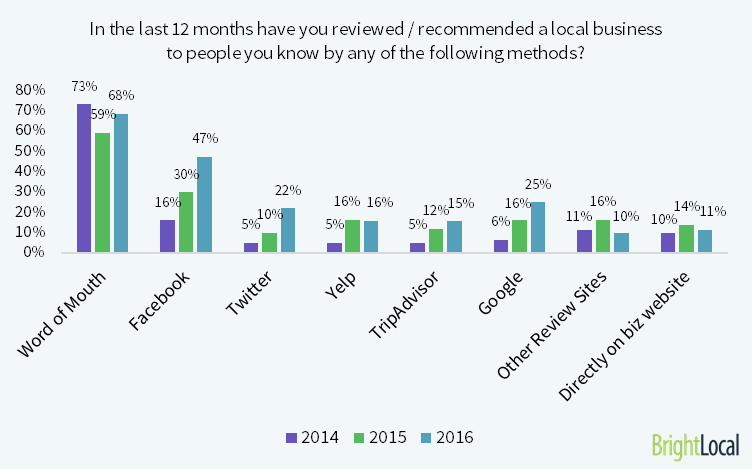 BrightLocal recently released the results of their 2016 Local Consumer Review Survey. The purpose of the annual survey, which BrightLocal first launched in 2010, is to evaluate how online reviews influence consumer behavior, and how these trends shift over time. This year’s survey had just over 1,000 participants, and consisted of 16 questions. The 2016 data further reinforces the growing importance of online reviews, and when compared to data from previous years, you can clearly see just how much online reviews have evolved over the past six years.

I put together a list of what I feel are some of the top highlights from this year’s survey, with a brief explanation of what they mean for local business owners.

Consumers tend to be superficial when looking at online reviews.

One of the new questions that was added to this year’s survey asked consumers which factors they pay most attention to when evaluating online reviews. Surprisingly, a business’s average star rating was the most significant factor, followed by sentiment and recency of reviews. What’s even more puzzling is that less than a third of respondents are even bothering to the read the actual reviews. Since this is the first year this question was asked, there unfortunately isn’t any previous data to compare these findings to. I’d imagine that over time, consumers will become more scrupulous when reading online reviews.

Word of mouth still reigns supreme, but social is closing the gap.

Although word of mouth is still the most popular endorsement for local businesses, reviews on social media sites like Facebook and Twitter have increased significantly since 2014. Additionally, one in four consumers said that they reviewed a business on Google in the past 12 months, which is nearly a 10 percent increase since 2015. Interestingly enough, Yelp seems to have plateaued.

Most consumers will leave a review if you ask.

Half of the consumers surveyed said that they left a review after a company asked them to. However, that number is actually skewed since 30 percent of the respondents said that a company has never solicited a review. When you eliminate those that were never asked, that number increases to 70 percent, meaning 7 out of 10 consumers will leave a review if you ask them to do so. It’s as simple as that, folks! All you need to do is ask.

Most consumers trust online reviews as much as personal recommendations.

Online reviews are extremely important for local businesses. Not only are customers writing online reviews more frequently, but they also trust them more to help guide their purchase decisions. When you look at the trends from 2010-2016, it’s clear that the value of online reviews – for both consumers and local business alike – will only continue to grow over time.